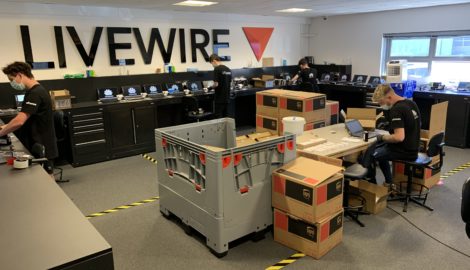 As the nation starts to embrace the 5G mobile communication network, Livewire – official UK distributor for Huawei – says it has big plans for its future at Silverstone Park.

The business has been based inside its current 5,000 sq ft Buckingham Road premises since 2012.

On average, Livewire ships close to 50,000 devices using Huawei technology every month to consumers not just in the UK but around the world.

Amazon is a major client, whilst others include the UK government, emergency services, NHS, the British Army and Navy, Starbucks and numerous large media outlets.

“We’ve had the Huawei contract since 2014, although I had started Livewire as long ago as 1999,” commented founder Richard Gallant who runs the business with wife Emily.

“I’d worked with every mobile communications manufacturer from Apple to Sony at some point, but as long ago as 2007 noticed Huawei was starting to emerge as an OEM. So, I flew out to China and did a bit of a deal with them and that was the start of things.

“From here at Silverstone Park, we deal with all of Huawei’s networking devices – broadband, wireless broadband, 4G and 5G broadband, plus handsets, tablets, laptops and, increasingly wearable technologies.

“The whole spectrum, really, but the main focus is mobile broadband… a ‘MiFi’ or modem with a sim card that give you access to superfast 4G or 5G.

“5G is growing in cities in particular at the moment. We are convinced more people are going to go in this direction and away from conventional lines into their homes.

“Also, 5G streaming in your house to turn it into a connected home is moving at a rapid rate.”

Livewire currently employs 15 full-time staff and a further ten part-time. Together they make up teams focusing on UK and international sales, marketing and online retail.

Each department has a dedicated, smart and well-equipped office, whilst Livewire has even included a film studio for its YouTube channel, as well as board room and sizeable warehouse and distribution centre, into the design of its fit-out.

The resulting ‘production line’ style operation is impressively slick and, currently, this extends to responsible social distancing measures also put in place on site by the business.

And it has had to be slick with demand for product increasing thanks to a new contract to provide connectivity for government projects – this has included supply of 55,000 mobile broadband devices to help schools with remote education of students during the COVID-19 situation.

Emily continued: “We are ready to scale up as a business and our plan is to move to bigger premises at Silverstone Park in the near future.

“The intention is to increase staff levels by about 40% so we will be recruiting in areas such as customer and technical support, sales, marketing and software development.

“Huawei have also asked us to offer a VIP service for customers purchasing their new HMS smart phones which are a rival to Google.

“In addition, we’ve signed up a new handset brand called ‘realme’, which is up-and-coming in Indian and China, selling their products directly to Amazon and getting them to a number one selling brand within the handset category.”