Cristiana Pace named as one of ‘Top 50 Women In Engineering’ 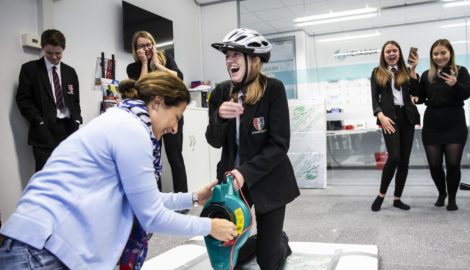 Cristiana Pace named as one of ‘Top 50 Women In Engineering’

Cristiana Pace, owner of Silverstone Park occupier Enovation Consultancy, has been recognised as one of the Women’s Engineering Society’s (WES) ‘Top 50 Women In Engineering’ for 2021.

The recognition follows work by Enovation Consulting to inspire young girls into engineering through programmes such as ‘Girls On Track’.

In addition, Enovation’s consultancy work in sustainability, such as the ‘Oxford Box’ project – a revolutionary aerosol shield that Cristiana led development of with fellow engineer Ron Hartvelt’s One Group business (also based at Silverstone Park).

Some 60 Oxford Box devices have since been manufactured for use in hospitals across Oxfordshire, to help shield frontline health workers including doctors and nurses treating Covid patients.

Following trials with the Oxford University Hospitals NHS Foundation, the project has successfully attracted funding from Innovate UK, with a fully workable paediatric Oxford Box having also now been developed.

Cristiana was named in the ‘top 50’ list on International Women In Engineering Day (23 June) – an annual event which was launched by WES in 2014.

She commented: “It’s very rewarding to be recognised in this way by the Women’s Engineering Society – I am honoured to be included in this ‘hall of fame’ which has so many inspirational female figures.

“With Enovation Consulting, we have worked with thousands of girls and young women globally as part of the Dare To be Different and now Girls On Track programmes.

“The Oxford Box project has been just as enjoyable to work on as it connects both healthcare and global challenges.”

Among those to congratulate Cristiana was Silverstone Technology Cluster CEO Pim van Baarsen – Cristiana is also an Ambassador for the STC’s Gender, Equality & Diversity Committee.

Pim said: “Not only is Cristiana a role model for young women in engineering, but also very typical of engineers in the STC, whereby they apply their expertise and competitive mindset to solving problems across a whole range of areas and sectors to support people.

“What more could one want from an engineer who applies their thinking, expertise and drive to improve people’s lives – isn’t that the very definition of an engineer?”