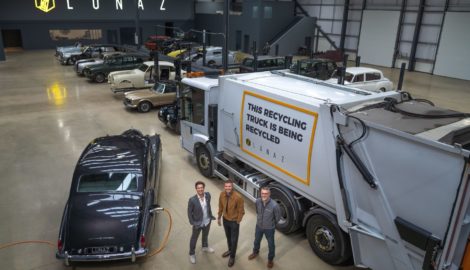 England footballing legend David Beckham has taken a 10% stake in Silverstone Park based business Lunaz which predicts it will be employing 500+ people by 2024.

Having recently expanded to larger 40,000 sq ft premises at Silverstone Park, the vehicle electrification company confirmed Beckham as one of its investors – others include the Barclay, Reuben and Dellal families.

Beckham commented: “Lunaz represents the very best of British ingenuity in both technology and design.

“I was drawn to the company through their work restoring some of the most beautiful classic cars through upcycling and electrification.

“David Lorenz and his team of world-class engineers are building something very special and I look forward to being part of their growth.”

The wider Lunaz Group is forecasting it will double the number of jobs for engineers and manufacturing technicians by 2021, with that figure increasing to more than 500 highly skilled positions three years later.

It anticipates its workforce will grow in line with the execution of its Lunaz Applied Technologies and Lunaz Powertrains business plans.

The Applied Technologies arm upcycles and re-engineers specialist industrial fleet vehicles (including fire engines and refuse trucks) to factory new standard and converts them to the Lunaz proprietary electric powertrain.

These are in addition to Lunaz Design which has become famed for reviving, re-engineering and converting pinnacle classic cars to electric powertrains. Recently its work won a major award from Top Gear.

Lunaz Founder David Lorenz commented: “Our commitment to Silverstone affirms the United Kingdom’s status as a leader in the development of clean-air automotive technologies.

“Firms like ours, which operate in the principles of the circular economy, show that British industry can provide potent answers to the global need to transition to less impactful industrial practices.”