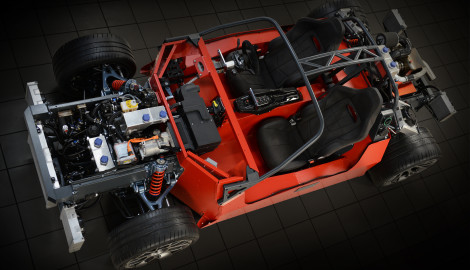 Cutting edge electric vehicle technology designed and developed at Silverstone Park has been used to help create one of the world’s fastest accelerating and most advanced supercars.

Much of that shattering performance is down to highly complex technology derived by Silverstone Park-based low carbon vehicle specialist Delta Motorsport – this includes a high power 42kWh liquid-cooled battery.

Delta’s Managing Director Simon Dowson explained: “We’ve been responsible for the battery system, the charging element of the battery, the range extender and the powertrain control which includes torque vectoring – that is the independent control of torque at each individual wheel to give improved handling, traction control and stability control.

“It’s been a 24-month project initially co-funded by Innovate UK. We didn’t need to put together a special projects team as we already have technology sub-sections within the company so it fell into what we already do.

“Then it was a case of achieving vehicle integration – making sure that everything we designed fits into the parameters of the vehicle.”

Delta it seems was able to fulfil Ariel’s requirements in terms of numbers and performance without too much trouble, although Simon admits there was one area that caused some head scratching.

He added: “The most difficult thing to overcome was the car’s very tightly packed large battery system to cope with the track based duty cycle (TBDC) which is particularly aggressive compared to a normal road drive cycle.

“It’s just the same as comparing the MPG in an ICE (internal combustion engine) car when driving ten miles on the road and ten miles on a track with hard acceleration and braking. The biggest issue in the system of an EV is controlling the thermal conditions; the system doesn’t get a rest on the track so managing the motors, inverters and battery is a challenge”

Simon also believes the P40 should be seen as a pointer to the future and a showcase for today’s electric vehicle technology.

“Most road going electric cars… if you took them onto the track and drove them hard for five minutes wouldn’t be far off coming in and needing to cool everything down,” he said.

“With the P40 you’d get just about the same amount of time out of it on a track as an ICE road car.

“You have to remember as well that the P40 is first and foremost a road car which can go on the track. It represents the shape of things to come; you only have to look at the images of the car and the figures to see it’s very exciting.”

The P40 project has clearly been an exciting challenge for Delta’s engineers and technicians and has added to the company’s credentials as a leader in EV technology in Great Britain.

“The P40 represents where EV technology is at the moment,” said Simon. “We are always looking at ways to improve alongside any technology progress. Understanding the problems is how we can go about solving them and working with R&D support from Innovate UK makes this possible.”

Meanwhile CLICK HERE for a full technical report on the Ariel P40.