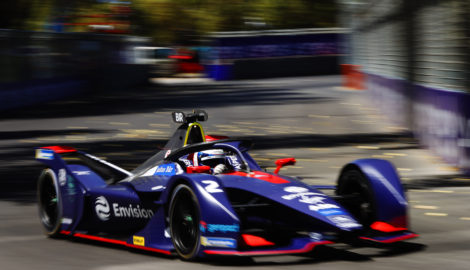 A cutting edge VI-grade racing simulator is to be part of Envision Virgin Racing’s expansion plans for its operational headquarters at Silverstone Park, it has announced.

The team, which currently leads the FIA Formula E electric racing car championship standings, has begun work on its state-of-the-art facilities this week.

The work, including the simulator plus a mezzanine floor, is due for completion in the summer ahead of Formula E’s fifth season.

This is in addition to three dual AC charging stations that have already been installed by the entrance to the team’s 11,000 sq ft premises. The stations are in partnership with electric vehicle charging tech company ChargePoint and enable up to six vehicles to be charged at once.

The latest work will provide the team’s employees with more space, it is also in keeping with government agency BREEAM’s ’Very Good’ energy sustainability standards – awarded to the whole 125,000 sq ft site.

Recently the team’s premises were also certified carbon neutral by the Carbon Trust.

Sylvain Filippi, Managing Director for the team, said: “As one of the founding and most successful Formula E teams, it’s fantastic to watch the team grow year-on-year.

“Moving to Silverstone Park was an obvious choice due to the facilities, skillset and like-minded businesses on our doorstep.

“Now, after being here less than two years, we’re in a position to implement the second phase of the development, thanks to the investment and foresight of the team’s new majority owners, Envision Group.

“Once complete, the new work areas and simulator will help further improve the quality of our race preparation for season six, as well as show our continued commitment to Formula E.”

CLICK HERE to look back at Envision Virgin Racing’s 2018/19 FIA Formula E season launch from its Silverstone Park base.