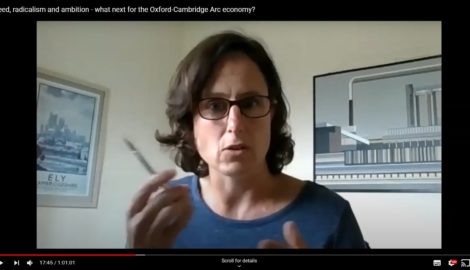 Silverstone Park Commercial Director and Silverstone Technology Cluster Chair Roz Bird has insisted that the future of young people should be “at least 50% of the discussion” in developing the Oxford-Cambridge Arc.

Roz’s belief that the growth corridor’s title and purpose should work for all people as well as the economy between the two famous cities has also been supported by Bridget Rosewell, a Commissioner of the government’s National Infrastructure Commission (NIC). Similarly, her call for collaboration between local enterprise partnerships (LEPs)…

The NIC is the executive agency responsible for providing expert advice to the government on infrastructure challenges facing the UK. HM Treasury is its parent executive agency.

Roz was speaking as a guest panellist during a webinar hosted by leading property consultancy Bidwells, entitled ‘Speed, Radicalism, Ambition: What next for the Arc’s knowledge economy?’

“If you just talk about Oxford and Cambridge people think it’s about getting professors on a train to work with each other; they are already working with each other,” commented Roz.

“Naming it that (Oxford-Cambridge Arc) isn’t what was meant by it – it was about everything in between. If we talked about it like that; talked about Bletchley, Harwell, Culham, Colworth, Westcott, Silverstone, Milton Keynes and what the opportunities are…

“People would think: ‘What’s in it for me? It’s about my job, my business, trading with each other along that geography. It’s about young people who live next door, my children, my grandchildren, getting an education in an area that’s really going places, that’s benefiting from all that science and tech and the multiplier effect; what a great place to start, run and grow a business.’”

Roz has previously asked that the Arc become known as the UK’s ‘High Tech Super Cluster’ and she touched on this again.

She added: “I know ‘Oxford Cambridge Arc’ is a good name to promote UK Plc abroad, but it’s not inclusive.

“If you call it a ‘cluster of clusters’ or ‘super cluster’ then people in Bedford (for example) are going to think it’s about them, too, and will be inspired to raise their game.

“Coming to young people… that is so much 50% of this discussion; it can’t be any less than that because young people are the future of our business community and economic prosperity.

“If you really want to make a change fundamentally and maximise the opportunity, you need young people at secondary school to be going ‘I’m so lucky to be getting my education in this area – what job am I going to get?’

“To do that you need the information in the schools and colleges that’s really pertinent to the area; we know at the moment that local career pathway info is lacking in schools. As a business community we should take some responsibility for that, help schools and encourage government departments to change the agenda so there’s careers education and support.”

Having heard Roz, Bridget replied: “Roz is absolutely right. It’s why we put the ‘MK’ in the middle of title (Oxford-Milton Keynes-Cambridge) when we started.

“It’s about everybody. The bottom up story is absolutely crucial. It’s got to be told by the business community, people on the ground, the LEPs coming together. There’s no point in me telling it from the National Infrastructure Commission.”

Roz later continued: “I have been talking with Buckingham MP Greg Smith and told him we really want to look at getting the Department for Business, Energy & Industrial Strategy and the LEPs, cluster organisations and science parks in the area talking about this local opportunity for companies across the whole Arc; to work together and trade with each other and have that inspire them. And work with schools and young people to improve the information going in.”