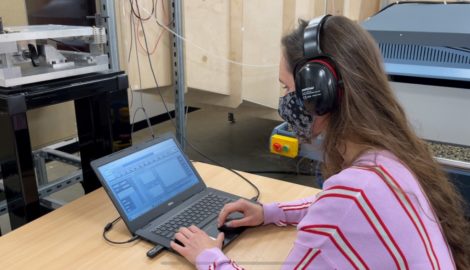 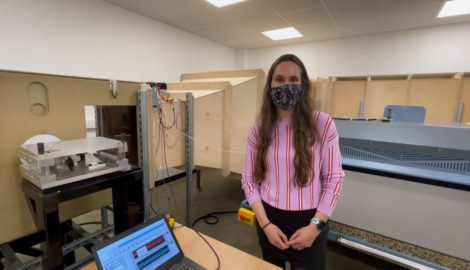 This Wednesday 23 June marks International Women In Engineering Day 2021 (INWED21), but our celebration of this annual date is going further than just one day… Each day this week we will publish an interview with a different woman working in engineering inside a business based at Silverstone Park.

Up first is Jessie McGuire, aged 24, a self-confessed ‘outdoor sports nerd’ (think rock climbing and the triathlon disciplines of cycling, swimming and running). These, combined with her interest in art and textiles, mean her job – as a Production Coordinator for Vorteq Sports inside the Silverstone Sports Engineering Hub – is almost like a hobby for her.

“I was always academic, and good at maths and science, but I also enjoyed art and textiles, and loved making my own clothes.

“A lot of people were telling me do to chemistry and biology, but instead I followed my instinct and studied textile design at St Martins College, London.

“At first, I didn’t like it – I was designing clothes for design’s sake; not clothes with any purpose. I almost jacked it in, but then got into sports, especially triathlon, and something clicked.

“I realised I could combine the two and was able to tailor my final projects towards sportswear-based projects.

“I’m really interested in the construction, the fabric technology, the machine or C&C cutting, the layering of different fabrics, the creativity you can achieve…

“When the opportunity with Vorteq came up it was perfect as it embodies everything I want to do. I’m designing on a computer and it has a purpose – it can make athletes faster.

“It’s very satisfying developing an idea and seeing it become something that an athlete wears and wins a race.”

The pinnacle so far has been 2020’s National Cycling Championships at Manchester.

“The Huub Wattbike team won gold in the velodrome using our kit. That was so exciting – knowing the science, data and percentage in improving performance we’d evaluated in the wind tunnel had contributed to that. Now I’m looking forward to the Olympics.”

Away from results on track, there’s another buzz that Jessie gets as a woman in engineering.

“I was excited by the job and role when I came for my interview at Vorteq but, coming from a textile design background, I’d mostly been surrounded by women.

“When I was shown round there were 20 men and one other woman – I thought ‘oh my gosh’. But I knew the job was right for me – again I went with my instinct and took that step. We’ve actually now grown to four women in the team.

“Don’t ever let something like that put you off; you’ll be doing a job you love and you can inspire others.”