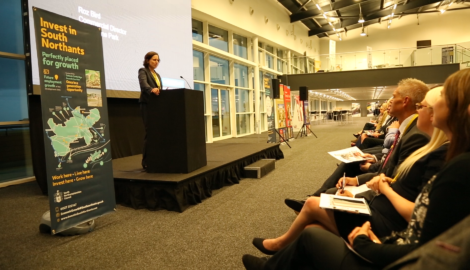 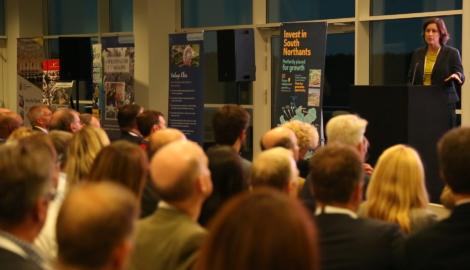 South Northamptonshire Council has been praised for “getting the right people in the room together” at its Innovation & Investment Conference – thereby enabling Silverstone Circuit, Silverstone Park and the Silverstone Technology Cluster (STC) to promote their achievements to date and proposals for the Cambridge-Milton Keynes-Oxford (CMKO) growth corridor.

That’s the view of MEPC’s Roz Bird, Commercial Director at Silverstone Park and also Chair of the STC after she had also spoken as part of a panel at Highways UK’s ‘Delivering a World Class Heartland’ conference.

Both events were held inside Silverstone Circuit’s Wing building and Roz was upbeat about the SNC conference at which the Park and STC exhibited as sponsors.

She commented: “It was very well attended – it’s great to have partners like SNC who know how to run a quality event with a good agenda.

“Importantly for us, they were able to get the right people in the room, to acknowledge what the Circuit and Silverstone Park has already achieved and hear about the very real future plans, to continue to develop the Silverstone brand and the place as an attractive leisure and business destination.

“The event also enabled us to talk with some very interesting parties with exciting plans that could come to fruition at Silverstone. It is clear that the brand, coupled with our ability to deliver, is a compelling proposition.”

Part of the event included a prize of a Silverstone Driving Experience, for the most networking – achieved by a swiping of name badges as guests interacted with one another.

She has since said she would like to give her prize to a carer in the local community and will set up a nomination process to identify someone who would love the chance to go out on the circuit.

During the SNC event Roz was a guest speaker, having been a panellist at the previous week’s ‘Heartland’ forum. Both provided an opportunity to reiterate her ‘marketing and maximising’ message to key audiences about the way forward for the CMKO corridor…

“As I’ve said previously, the corridor is a cluster of clusters – a ‘Super Cluster’ – and that is how it should be promoted,” she stressed.

“The USA and China could very quickly realise that this is where they need to invest but we have to get the marketing right – currently there’s not even a phone number or an organisation to contact to find out more.

“We need to make sure that the business and finance community helps to maximise the opportunity created by the government focusing investment in the area.

An Roz continued: “There are several key cluster organisations, science parks and universities in the high tech super cluster in the south east of England (aka CMKO) that want to work together to drive economic growth and prosperity for all in the local geography and beyond, to make a greater contribution to GDP and to provide a flagship project to promote UK plc, post Brexit.

“It’s about joining up the activity across the super cluster and applying its capabilities to the problems of today and the future, such as big data, AI, ageing population, skills, schools and so on.

“Overall, inspiring people to recognise the opportunity and therefore to think differently about how we can all work together; for example how businesses interact with schools in their local community.

“There is an opportunity to get rid of the ‘us and them’ mentality and develop a community of mutual regard, a force for good and economic prosperity in our economy.”