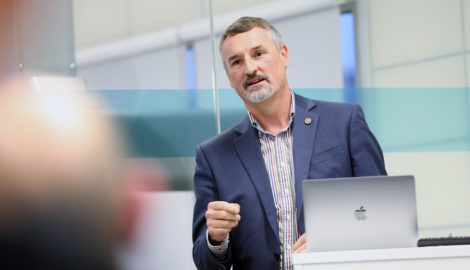 His presentation reflected on his first endeavours in engineering which included studying ‘Further Maths & Physics’ and working on aeroplane and helicopter engines with Rolls Royce and Agusta respectively.

This led to a senior development role (designing oil and water pumps and cylinder heads) with Cosworth whose engines ultimately powered Michel Schumacher to the first of his F1 titles in 1994.

After similar successes in the German DTM (then known as ITC) and British touring cars, he helped Renault win back-to-back F1 titles with Fernando Alonso in 2005 and 2006.

He then went on, with fellow engineer Doug Cross, to found and build world-leading hybrid flywheel specialist Flybrid (now PUNCH Flybrid) at Silverstone Park before becoming President of the Institution of Mechanical Engineers.

He is now Managing Director of Lunaz Design which is leading the way in the conversion of luxury classic cars to electric power in new premises at Silverstone Park.

He highlighted a series of ‘top tips’ for starting and running a business from keeping control of costs to patenting/IP and bringing on young talent via undergraduate or apprenticeship schemes to continual personal development (CPD) of staff.

And commented Jon: “The networking opportunity is obvious but these types of event highlight CPD for everybody present, whether they are inside the engineering community or on the edges.

“People are able to stay up to date with things that are going on; likewise seeing how business is moving on with ‘petrolheads’ like myself now transferring their skills into more environmentally friendly spaces.

“All those skills I had before from a different era and culture are completely transferable and getting things done in quick time is still the same challenge; the techniques still work the same way. It shows we can turn our hands to anything.

“For the audience it’s also an opportunity to hear how other people have handled situations and think a bit differently.”

Commenting on Jon’s presentation, Silverstone Park Commercial Director Roz Bird tweeted: “Jon Hilton was one of the first engineering entrepreneurs I met six years ago when MEPC took over the development of Silverstone Park.
“He was inspiring then but even more so now with such great business insights for our tech community.”