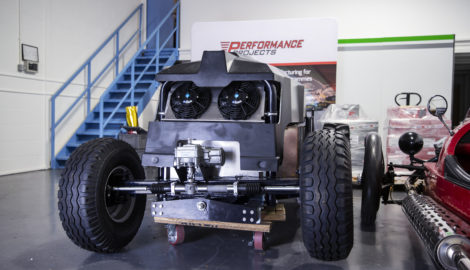 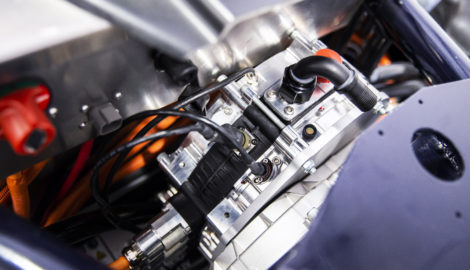 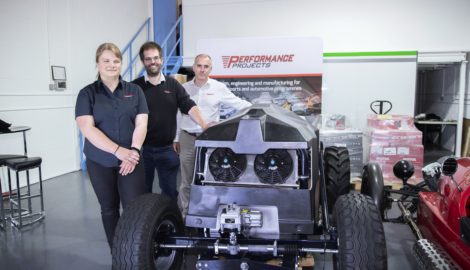 The UK’s first electric powered autonomous tractor secretly designed and built inside workshops at Silverstone Park is about to leave for its working life in the fields. Or, rather, orchards…

Dynium Robot’s striking-looking autonomous tractor is the second such vehicle to come out of Performance Projects’ premises in as many years.

However, the original was diesel powered. This latest battery powered edition is in reaction to an ever growing demand for cleaner technology – particularly in the agricultural sector – and “marks a coming of age” for Performance Projects, according to Director Chris Horton.

Overseen by Chris and fellow director Terence Goad, and with engineer Renette de Villiers taking on a management role, the project has taken six months for Performance Projects to complete from a clean sheet of paper.

“We have had a major role to play in this vehicle including the mechanical design, production planning and build,” explained Chris.

“This has included chassis, steering arms and pitches to cooling for all the power electronic and controls and the battery pack itself as well as systems integration.

“This is the first so called ‘hazardous voltage’ vehicle that’s been built from our unit so it’s a proud moment in Performance Projects’ history. Certainly it’s marked a coming of age in the EV world for us.”

Funding for the project has come from Niche Vehicle Network which has previously invested in other Performance Projects collaborations.

Dynium’s expertise is in ‘machine learning’ – in this instance developing the driverless tractor’s software so, using a LIDAR navigation system, it can map out its environment and cover ground efficiently.

More importantly, though, the software is able to detect the growth stage and conditions of plants – thereby enabling a reduction in the usage of chemicals during treatment

Charles Kirby, MD of Oxford-based Dynium, said: “We don’t believe anyone else in the world is developing this type of product.

“For example, the tractor’s relatively small size enables it to drive through orchards and it could even go on to produce the world’s first truly carbon free product!

“Not only can the tractor navigate its way around farms and detect diseases, but the battery pack enables it to go for days without needing to be recharged.

“Extra battery capacity means it can spray and mow in an orchard and, as it does, data is collected, processed in ‘the cloud’ and it can then carry out further missions.”

And he added: “I chose Performance Projects because to carry out the design because of the way they work – there is significant risk reduction and it’s an opportunity to work with some of the best mechanical engineers in the country who are normally the preserve of Formula 1 teams.

“Silverstone Park is also an ideal location for a business like ours when developing a tech product – the place is so well connected to the wider tech community in the Silverstone Technology Cluster.”

“It has been great to see the vehicle build progress at Performance Projects on Silverstone Park and the whole project was completed in six months, which is amazing.”