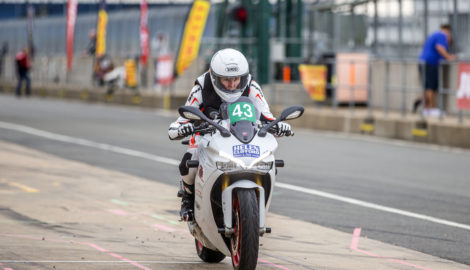 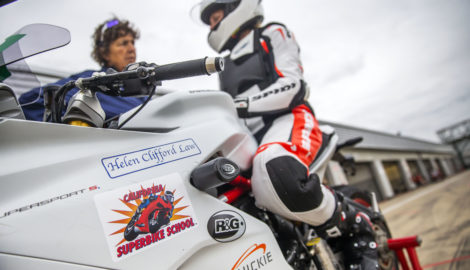 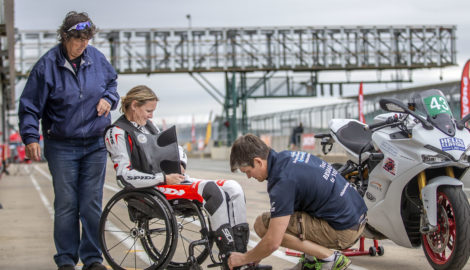 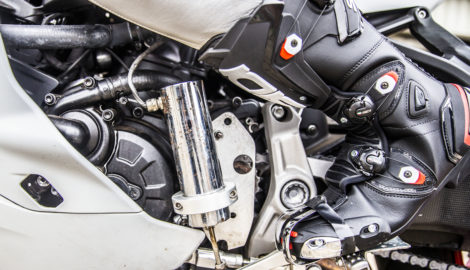 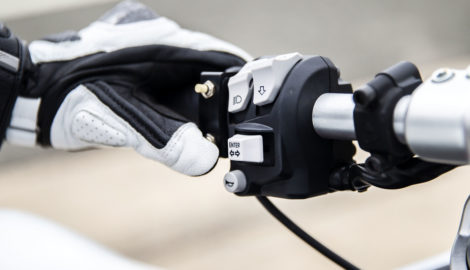 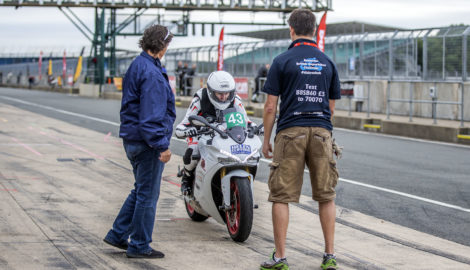 Silverstone Park based California Superbike School (CSS) is working with paraplegic ambassador Claire Lomas to help her achieve her ambition of riding a lap of the famous Isle of Man TT course in aid of charity.

Claire had already gained her ACU beginner’s licence in spite of being paralysed in a horse riding accident in 2007 when she was one of Britain’s top names in eventing.

She is famously known for covering the London Marathon course in 17 days wearing a ‘ReWalk’ robotic suit.

Other endeavours – including single laps of circuits at British Superbike events – have enabled her to raise over £700,000 in aid of paralysis research and care.

Now she hopes to add to that tally by riding a lap of the Isle of Man TT course during the Manx Grand Prix meeting – the course is almost 38 miles in distance!

CSS, among the world’s top names in teaching advanced bike riding techniques (including some names at MotoGP level), has been working with Claire to advance her towards her TT goal.

And said Claire: “They are amazing and very much a part of my attempt at a lap of the TT.

“They provide a lot of one-on-one tuition which enables you to really progress as you’re not distracted by what others are doing.

“But it’s more than just the help with the riding – they are genuinely enthusiastic and love what they do. I would recommend CSS to anyone who wants to get their confidence up or become safer.”

‘Catchers’ and ‘throwers’ are required to help Claire launch away and stop again but CSS General Manager and Senior Riding Coach Richard Browne believes she is progressing towards achieving her ambition.

“When Claire is riding in a group you don’t spot her because of her disability – she seems as comfortable and confident as anyone else out there,” he said. “It has been the same with other wheelchair riders or amputees that we have worked with…

“She has been clocking up over 30 miles a day with us but that has been in stints – to do a lap of the TT will require her to put all those together in one go. Her limitations means she has to use her arms a lot more and it’s a lot harder physically to support herself as she can’t use her back muscles at all.

“Fatigue will undoubtedly be the biggest hurdle for Claire – once she is sent on her way she cannot stop until she gets to the end and her catcher is there. On saying that, adrenaline can help people overcome mental barriers.”

And he added: “Weirdly, because Claire had never ridden a motorbike before her accident has actually helped because she’s had no previous habits to undo…

“Gaining her ACU licence and doing the laps at BSB events meant she was already competent when she came to us – what we’re about is developing confidence on the bike and an understanding of what is happening.”

Fellow Silverstone Park business Ducati UK, a partner of CSS’s, has donated a bike – one of its 933cc, 130hp Supersport S models – which has had to undergo technical modifications to enable Claire to ride.

This includes a hand-controlled gear shifter as she has no movement or sensation in her legs and feet. Other modifications are a not quite so sophisticated – such as Velcro and bicycle toe clips to hold her legs and feet in place!

“The only bit of the bike I can feel is the handlebars, but once I am away I feel at home – it is a very big adrenaline rush, particularly when life in a wheelchair can be slow. I feel free and, as I get better, it gets more exciting.

“I’ve been impressed with the motorbike world – I didn’t know anything about it before I suddenly got an urge to learn to ride one. It’s much friendlier and more welcoming than I imagined.

“It’s all helping me to edge closer towards my goal – ultimately, though, it will be up to me to convince the TT organisers I’m capable enough and that is only fair.”

She also reflected: “Certainly after my accident I’ve had to persevere during some dark times – I felt like I’d lost everything, like my career had come to an end and I’d lost the sport I’d got to a high level in…

“But it’s about not letting things beat you. It takes some adapting to, but now I’m doing things I never thought in a million years I’d do.”