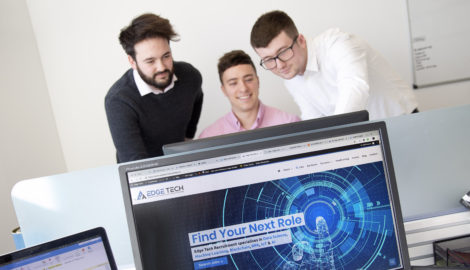 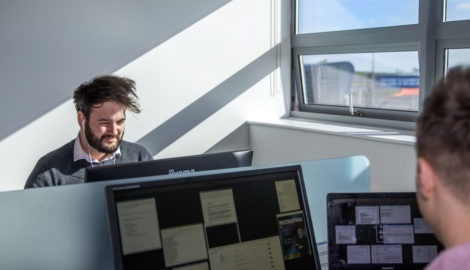 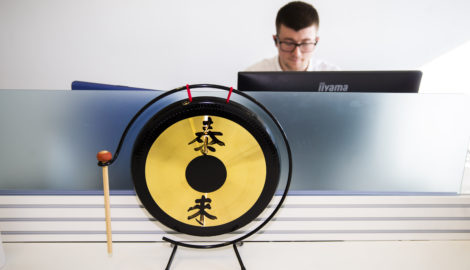 Edge Tech, a ‘head hunter’ recruitment agency specialising in the world of cutting edge technology, is among several new start-up companies with growth ambitions to have located to Silverstone Park’s Innovation Centre.

Since November 2018, the three-strong team has been based in a 250 sq ft serviced office in the Innovation Centre and has quickly felt at home.

Joint founder Oliver Sulley commented: “We had been working for another recruitment company in Milton Keynes but, with about 15 years’ combined experience between us, we felt we could do a better job so wanted to forge our own path.

“Our instinct told us there was an opportunity to carve to out a niche and become the go-to people for it; the Innovation Centre here gives us a place with lots of networking and the opportunity to spark off other tech-minded companies.

“We looked at various property options but, to be honest, everywhere else was a faceless business park that didn’t have a story or a message that you could send out.

“Working in the technology space, everyone instantly knows the Silverstone meaning effectively we’ve already got a well-established brand and name behind us.”

Immediately, then, Edge Tech has put itself in pole position to play an important role in matching the right people with many of the exciting opportunities that exist in the high-tech sector.

Oliver continued: “We focus on areas such as artificial intelligence (AI), machine learning, the Internet of Things (IoT)… anything that connects one piece of technology to another like connected cars which are a very big part of it all at the moment.

“Another area is robotic process automation where menial software or admin tasks can be automated allowing staff to concentrate on other areas.

That Silverstone Park effect is definitely having an effect as proven by the frequent striking of a gong in Edge Tech’s office to celebrate another deal done.

For Edge Tech, those deals could be in the UK and also further afield as Oliver explained.

“Maybe 70% of our clientele are UK based but rest of recruitment we do is international, particularly in Germany, Scandinavia and the USA. That’s another positive thing about Silverstone – people overseas know the name; it adds prestige. We’re off to a flying start!

“There is also the Silverstone Technology Cluster which again is really relevant for us as it brings a lot of opportunities to meet people and businesses and let them know what we can do for them in finding the right people.”

As with many previous start-ups in the Innovation Centre, Edge Tech clearly hopes to use the Silverstone Park environment to help it expand.

Oliver concluded: “The developer, MEPC, is flexible when it comes to accommodation which is attractive for businesses – they are genuinely supportive of seeing a business grow and are not going to penalise you for wanting to move into bigger premises.

“It makes things clearer for us and in the next 12 months we hope to hire up to six more staff and double our square footage – we already have our eye on a space on site here.”