Vehicle exhaust treatment technology that could slash some city centre public transport pollution by more than 95 per cent is to be designed, manufactured and tested at new premises at Silverstone Park.

Exhaust after treatment designer and manufacturer Twintec Baumot has chosen to re-locate its UK headquarters in 8000 sq ft premises on the Park – part of a new development of 125,000 sq ft of industrial/workshop units completed by the high-tech business estate’s developer MEPC in November 2016.

Four new companies have moved in within the first six months, several units are now in solicitors’ hands with announcements to follow and a full range of units remain available to let from 5,000 sq ft to 30,000 sq ft under one roof.

“This is our development and innovation centre,” explained Alan Martin, a senior technical consultant to Baumot UK.

“All our material handling and customer support will be done from here but the premises also give us the ability to undertake 3D space measurement and 3D prototype printing. This is where all our prototype and pre-test work will be carried out.”

Baumot’s expertise makes it a much valued member of the Low Carbon Vehicle Partnership (LowCVP) – an influential private public body when it comes to discussing and debating ground-breaking technologies which could lower emissions.

So it comes as no surprise to learn that Baumot UK has emerged as a ‘preferred supplier’ to Transport for London and are now in talks with the capital city’s main bus operators about exhaust treatments on its vehicles.

That has inevitably led to advanced talks with operators in other city centres across the UK which are also bringing in their own Low Emission Zones (LEZs). The Government has recently allocated £40 million of funding to help city centres achieve emissions targets by introducing exhaust after treatment systems…

And it seems Baumot UK has the upper hand on market rivals as Alan explained. “Our technology, an ammonia gas system, is pretty unique.

“On the vehicle there is an ammonia generator designed by Baumot and that converts the ‘AdBlue’ (liquid ammonia which all vehicles run) into an ammonia gas and then injects that directly into the exhaust system.

“This principle overcomes the problems our competitors have with crystallization of AdBlue in exhaust systems. We can start operating this at a much lower temperature – this is very important for city buses because of all the stop-start nature of the vehicle which doesn’t really enable exhaust systems get up to temp.

“This therefore helps achieve the lower emission figures much quicker in the operation of the vehicle. It’s integral within the exhaust system so does away with having to maintain ammonia cartridges.”

And he added: “The beauty of our system is it’s much more compact than our competitors. Ultimately it can reduce NOx by more than 98% and we have the figures to prove it.”

Baumot’s work at its Silverstone Park HQ will also be working with the LowCVP to develop a test cycle for coaches – different to city centre buses because of the nature of their operation.

A team of 15 people – mainly technicians – are now based at Silverstone Park. Alan said: “When orders start to come in then we have to find workshops and train up more technicians. Apprenticeships will be part of any deal we have with Transport for London.

“The Silverstone region gives us the ability to source good technicians. There are a lot of electronics in this area and where else would you look for electronic support – plus we already work with Hexagon Manufacturing Intelligence which is on site.

“London was attractive but not the best place to draw on good technicians. That’s the strength of this region – it is a great skills centre.” 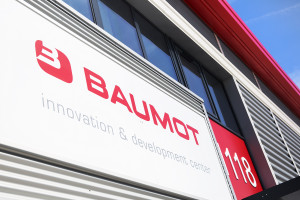