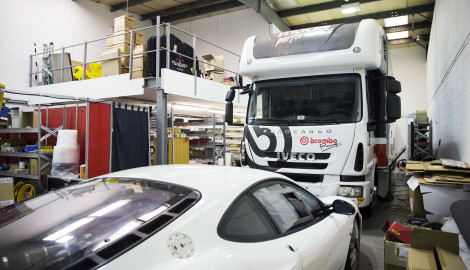 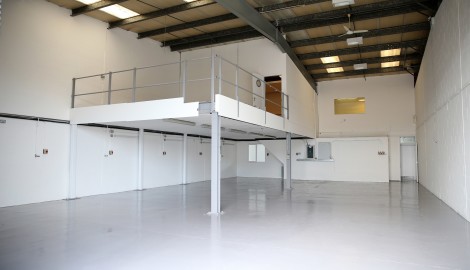 It seems barely believable but 2016 marks 25 years since, out of humble surroundings in Unit 21, Silverstone Park the name Jordan first appeared on the Formula 1 grid and the astonishing Grand Prix career of one M Schumacher was born…

Actually it was February 1990 when the story first started to grow legs as entrepreneurial racing team boss Eddie Jordan lured designer Gary Anderson to get started on the project inside Unit 21.

Today, the building is occupied by Mode Performance (pictured right) – the UK importer and distributor for Brembo’s road, race and high-performance motorcycle brakes. Before that the Manor F1 team held the keys to Unit 21. And before that the address was home to one of Britain’s leading spark and wire-erosion companies, EDM Precision, before it expanded operations with a move into newer premises on Silverstone Park’s Buckingham Road complex of units (ironically previously owned by Eddie Jordan until acquired by Silverstone Park developer MEPC)!

Given the leviathan size of a modern-day F1 facility, it is hard to believe that the 3400 sq ft offered by Unit 21 (that includes a mezzanine floor) would suit a small, privateer team looking to break into motorsport’s highest level. But in 1990/91 it served Jordan, Anderson and co proud. This truly was the stuff that dreams are made of…

In an exclusive interview with Silverstone-park.com, Anderson recalls with great affection the team’s debut in F1 – let alone the cheek of taking on giants such as Ferrari, Williams and McLaren from such small surroundings.

“Eddie had his very successful Formula 3 and Formula 3000 teams and at that time I was designing F3000 cars for Reynard which he used,” says Gary.

“He called me to work on his F1 car and Andy Green (now Force India) and Mark Smith (Sauber) came with me eventually. We all pitched in and did a bit of everything but mainly I did the aero, Andy suspension and steering and Mark engine installation and gearbox. Upstairs was a mezzanine floor (still there) but I had to design the offices off the side of it (still there). In the first months I recall I was actually there on my own. I didn’t even have a pencil to begin with.

“CAD systems had just started to come in but the Jordan car was 90 per cent pencil on paper.”

Out of those offices would come a Grand Prix great – the curvy Jordan 191 with its simple blue and green colours and 7-UP sponsorship. Not only did it turn heads but it achieved some startling results for a team in its first season of F1. Much of that was down to the brilliance of the design work carried out in Unit 21.

“The majority of the manufacturing was outsourced but the build of the car was in Unit 21,” adds Anderson.

“The big thing was to fully try to understand what made a Formula 1 car work. You can’t just try and copy someone else’s design without understanding it. By April 1990 we had an idea of a concept and in the corner by the shutters on the main door we had a third-scale model wind tunnel overseen by Paul Thompson (also now at Force India) and a very young Darren Turner (factory Aston Martin driver)!

“I don’t think anyone thought it would ever see an F1 race – myself included! We were just committed to getting a car built but then Eddie walked in and said ‘we’re on’. John Watson drove the car at Silverstone. Immediately he liked the car which was excellent feedback.”

Belgian Bertrand Gachot and the late Italian star Andrea de Cesaris were signed to race for the team but what happened next was astonishing on so many counts. Anderson recalls: “We actually used a neighbouring unit to launch the car to the press and only about six people turned up – people still didn’t seem to think it was actually going to happen!”

While Ayrton Senna and Nigel Mansell went on to fight for the drivers’ crown up front, behind Jordan started to shake up the order somewhat. In only its fifth GP, in Canada, both its cars finished in the points and in Belgium de Cesaris came desperately close to the victory.

For Jordan, though, Belgium was extra special for it was in that race the team gave Michael Schumacher his Grand Prix debut – the German brought in to replace Gachot who had been jailed for spraying a London taxi driver with CS gas! Within days Schumacher had been ‘poached’ by the rival Benetton team for which, in 1994, he went on to achieve the first of his record seven F1 titles. But not before he’d paid a visit to Unit 21, Silverstone Park.

“Bertrand, Andrea, Michael… they all came to the unit for their seat fitting and a look round before driving for us,” says Anderson.

By the time the 1992 season started Jordan F1 had moved across the Dadford Road into much larger premises – now Force India.

As Anderson concludes: “It was an asset being based at Silverstone. It opened doors, particularly when we were getting started with suppliers and the other things we needed.”