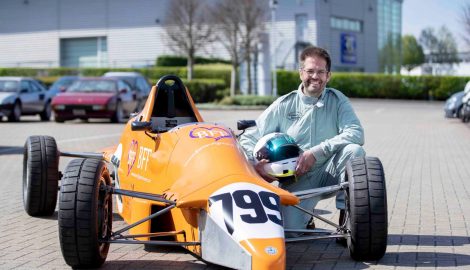 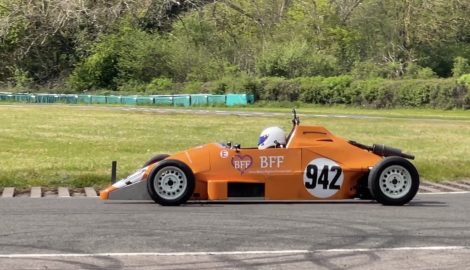 Chris Horton, a business director at Silverstone Park, is helping raise awareness of a charity that supports families of poorly children by using a racing car that has links to multiple Formula 1 World Champion Michael Schumacher.

Chris, Director of engineering consultancy Performance Projects, competes in sprint competitions (one at a time against the clock) in a 1980s Formula Ford 1600 single-seater racing car.

Chris said: “Two of our family friends’ children have been diagnosed with Batten and we’ve seen first hand the effect this has on people’s lives.

“I’m now a trustee of the Batten Fighters Forever charity and using my motorsport to raise awareness has had a surprisingly positive affect, even at club level.”

That awareness has been heightened by Chris’s performances – in 2021, he won the Formula Ford class title at the Curbrough sprint track in Staffordshire.

Interestingly, closer inspection of the chassis number on Chris’s Van Diemen reveals it is the very car with which Schumacher collided in a heat during the 1988 Formula Ford Festival event at Brands Hatch.

At the time the Festival was a major fixture on the UK motorsport calendar with many drivers who impressed going on to F1 fame. The collision caused Schumacher to retire while Chris’s car – then in the hands of a driver called Andrew Guye-Johnson – went on to finish eighth in the event’s final.

“It’s very strange to think this is the exact car that Michael Schumacher came off second best to at Brands Hatch all those years ago,” added Chris.

“Normally people came off second best to him (Schumacher), so it makes this car even rarer!”

The Michael Schumacher-Silverstone Park link doesn’t finish there: it was inside industrial unit number 21 on the Park (now occupied by Ferrari preparation specialist Keys Motorsport) that the German’s remarkable F1 career was born when he signed for the Jordan team – then based in the property!