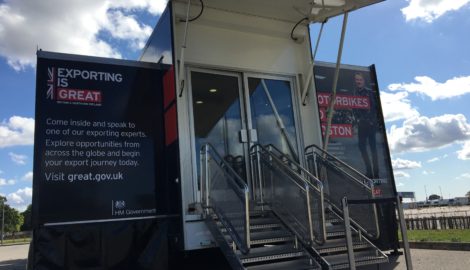 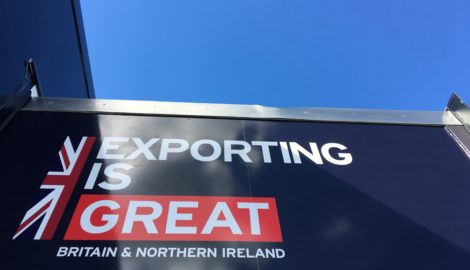 The Department for International Trade has praised Silverstone Park as “an optimum site” to showcase opportunities within business after its Export Hub made a second visit to the estate in September.

Companies from across the region including some based at the estate attended several sessions held by the DIT in the Hub – effectively a state-of-the-art business roadshow on wheels which previously visited in 2017. Silverstone Technology Cluster CEO Pim van Baarsen also presented to the audience.

Stuart Baird, Consul, Head of Trade for the DIT in Washington, USA, commented: “This was our final stop cross the Midlands which has also included Coventry, Wolverhampton and Lincoln and it is certainly a very picturesque location with the race circuit in the background!

“More importantly our regional international trade advisors felt Silverstone Park was an optimum site, particularly when talking about some of the opportunities in technology and the USA/Canada market for businesses in the region.

“It’s a region known for its technical expertise with the Silverstone Technology Cluster, the Innovation Centre at Silverstone Park and some of the businesses based in there, so it stood out as an opportunity to be here.”

Stuart also said that the DIT’s visit to Silverstone Park had achieved an important goal in attracting businesses working across a diverse range of skills.

“Our roadshow has enabled us to showcase the North American market to companies, in particular SMEs, across the Midlands,” he continued.

“We were very pleased with the variety of businesses which came to Silverstone. While tech/manufacturing was well represented, other businesses represented sectors such as retail, FMCG, life sciences and digital marketing which shows that the North American market is accessible for all types of companies.”