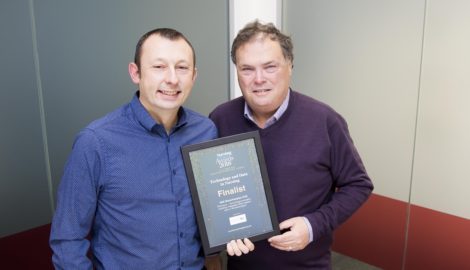 David Curran’s and Keith Williams’s business was shortlisted for the Technology & Data in Nursing award at the high profile Nursing Times Awards ceremony which celebrates achievement in the UK’s medical profession.

Its fSeries product has been adopted by the Wolverhampton Clinical Commissioning Group to provide staff with much more efficient way of accessing and presenting patient data.

Hospitals, mental health agencies and the local authority operating under the WCCG umbrella are all using fSeries to help with social care information and visiting records.

And in the North East, in Gateshead, the product has been installed by another authority to improve its hospital patient discharge system and thereby help with the freeing up of beds.

One local authority in the Midlands is now using it to paint a clearer picture of youth offending in a major city and another customer with files for its manufacture of industrial transformers for oil rigs.

“It can be used across many different sectors, including engineering,” said David.

“Ultimately it’s a solution for data sharing and presentation – we’re talking tens of thousands of records alone with Wolverhampton.

“Everyone has various systems in place but it’s about getting the information together in a clear and coherent way.

“Nurses who’ve used fSeries are telling us it’s like having the patient right next to you telling them their life story.”

He added: “Our software can link any system together in any sector and we’ve spent a lot of the last decade working with social care.

“Looking ahead, the next step is to make it cloud based…”

It was Fibonacci’s work with Wolverhampton CCG that led to it being shortlisted at the Nursing Times Awards alongside the likes of tech giants Capita and Capgemini. The winner of the award was the Countess of Chester FT.

David commented: “Just to be there up against some major players on neighbouring tables was a real achievement in itself.

“Keith and I moved Fibonacci into Silverstone Park’s Innovation Centre when it first opened in 2005. We actually started the business in 1998 so to not just be nominated but actually shortlisted for an award as prestigious as this is a great way to celebrate our 20th anniversary!”